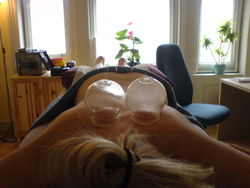 Cupping therapy is developed to a high level in Chinese medicine, but which also exists independently in many other traditional medicine systems. It is found in the folk medicines of Italy, Russia, Greece, Turkey, Brazil for example and was also highly developed in Arabic medicine where it was called hijama and recommended in scripture.

A partial vacuum is introduced into the cup, normally by using a flame, then the cup is quickly placed onto the body. The vacuum pulls the muscle and tissue up into the cup, aiding local circulation and loosening tightness and restrictions. There are also cups which use a pump and a valve to achieve the same effect.

In Chinese medicine cupping relates to a number of theories. First of all it can be used to ‘expel’ pathogens from the skin and muscle layer, this means in treating symptoms including mild fever, chills and fever, stiff neck and a little sweating. It also means it is indicated for situations where there is pain related to climactic conditions, e.g. a knee that is worse in the damp or neck pain that is worse in windy conditions. 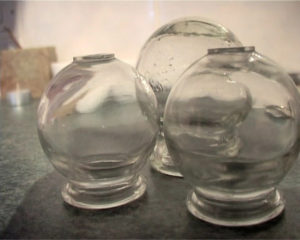 Another key area is that it is used to invigorate the blood, that is in situations where there is sharp or severe muscle pain, spasm and loss of movement we can say there is qi and blood stasis. By restoring the circulation of blood, stasis is removed and function returns

A third way cupping is used is to clear heat, e.g. in acne or other conditions with an excess red rash. This use includes ‘wet cupping’ (also the type favoured in Arabic medicine) which uses a small incision with the cup to draw out a little blood. This is not as common or popular in westerners. Further methods using cups include cupping with warm water to help moisten dryness, heating the cup to help warm a cold area, sliding cupping and flash cupping where the cups are placed and removed rapidly to promote circulation in the superficial levels of the body.

There is evidence that cupping displaces body fluids into the tissue directly under the cup which should help the local blood circulation and help release constricted tissue.

This works as tight tissue often becomes relatively dehydrated as blood circulation is impaired. In some situations this is so severe that the molecules that stimulate the muscle filaments to relax cannot reach their target receptors. The build up of metabolic waste products in tissues with reduced circulation also irritates the free nerve endings which report pain, so discomfort is amplified.

Also a recent review article concluded that cupping could be effective in treating some specific medical conditions including herpes zoster, facial paralysis, acne, and cervical spondylosis compared to standard treatments.