Yoga is the name of a group of practices from India and rooted in the Hindu and ayurvedic tradition which fosters self development. The majority of yoga practices in the pre-modern age were focused on spiritual development and devotional practices. The yoga we are most aware of in the west is the practice of postures (asana’s) with breathing- Hatha yoga- strictly speaking all asana based practices are part of hatha yoga, although the many different names given to different styles of yoga can be confusing, they share common root principles. Hatha yoga also includes aspects of physical practice aside from postural yoga including cleansing the body and kriya.

The Eight Limbs Of Yoga 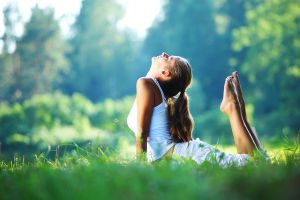 In the yoga sutra’s of Patanjali, probably the most influential classical text on yoga used today eight strands of yoga are outlined.

Yama- right living, moral restraints or vows. These are guidelines to the way we live our lives as a whole. There are five yama’s, Ahimsa (non-violence), Satya (truthfulness), Asteya (non stealing), Brahmacharya (right use of energy), and Aparigraha (non greed or non hoarding).

Niyama- Positive action and observance, this refers to our actions and behaviour to ourselves predominantly but can be extended to how we behave towards the world.

There are five niyama’s saucha (cleanliness), santosha (contentment),  tapas (discipline or the burning of desire), svadhyaya (self-study or self-reflection, and study of spiritual texts), and isvarapranidaha (surrender to a higher power).

Asana- The postures. The actual word means seat and some think it originally referrd simply to the seated meditation positions, and being able to be in them and be comfortable and steady, but has been expanded to all the range of positons of modern yoga. Although it is still part of the challenge to be comfortable and steady in any of the more challenging asana today.

Pranayama- Control of breath, Prana. Prana is breath but is also life essence and has a very similar conception to qi in Chinese thought and medicine. By learning to control the breath we can, the belief goes, foster life.

Pratyahara- withdrawal of the senses. This is an important part of meditative practice, and refers not to cutting ourselves off but to the ability to let the senses be and not getting caught up in them in order to focus the mind.

Dharana- Focused concentration. This goes hand in hand with pratyahara, the one makes the other possible and they are cornerstones of meditative practice.

Dhyana- Meditative absorption. This is the eventual product of the practice of pratyahara and dharana, the state when your ability to not be distracted and to focus becomes and state of non-thinking and just being. In this state the mind can settle and release. It is not a state of doing something but what is there of us when we are completely present.

Samadhi- Realisation or enlightenment. This is the final stage of development once we have organised our relationship with the outside and inner world we can, hopefully, see the world as it really is. To see the world as the same, ‘sama’ means ‘same’ or ‘equal’, and ‘dhi’ means ‘to see’. This concept is not about escaping as much as accepting, seeing the world as it is.

Apologies at the simplicity of rendering of these concepts which are far deeper than I have been able to express. My aim is to introduce them in a readily understandable way. I hope to have accomplished this.

What most of us know as yoga is a collection of postural stretches, balances and movements which has been shown to have been a relatively recent development, from the early 20th century. Although there is evidence of the practice of certain asana prior to this time Mark Singleton, in his book Yoga Body’ has shown quite definitively how much modern practice has been influenced by physical culture movements in the west fused with an Indian project of national strengthening and betterment. Although I would not say that we can claim modern yoga practice is concocted with little link to the hundreds of years of history as the evidence he draws from is textual and modern transnational yoga, as he styles it, as with most physical practices is not a textual tradition but one of teacher-student transmission. However neither can we identify a definitive link between sculptural and painted images seeming to depict asana and what is now practiced as yoga worldwide.

This being the case though is not to say that modern transnational yoga is without value or authenticity in itself. It is certainly a health benefiting activity which with regular practice strengthens the body and any person with a regular practice will also tell you of its calming and centring effects on the mind. It has been credited as beneficial in the management of anxiety, chronic pain, digestive disorders and hormonal imbalance. There has even been research demonstrating some of these claims recently. 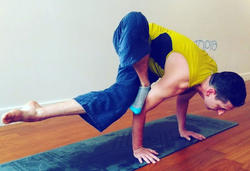 Yoga can be gentle or strong and strengthens the muscles and tendons as well as encouraging greater flexibility in the body. Most importantly the practice of yoga focuses the mind and improves body awareness. If practiced with awareness of the other limbs it is also a compassionate moral system which has the potential to make the world a nicer place.

These are some of the reasons I practice yoga myself, i find it informs my understanding of functional anatomy and movement through body awareness, it keeps me strong and flexible and perhaps most importantly helps me manage stress and work so that i can come to my clinical practice with a focused clear mind to help my patients.

Although I am not a qualified teacher, and therefore do not teach it, i do use some of the postures as awareness building exercises or stretches for clients. I recommend a practice of yoga, Pilates, qigong or taiji to people who are interested as any of these exercise systems have the potential to benefit health and body awareness, assist posture and enable healing. As an aside I have also developed a specialist sideline in helping yoga practitioners through restrictions which are affecting their practice and the treatment of injuries and niggles arising from it since i understand the process and the postures effects on the body.