Acupuncture literally means puncturing the skin with a needle, but it is used to refer to the practice of Zhenjiu (Chinese) or Shinkyu (Japanese), an ancient physical therapy based on the theory of a network of channels which distribute vital energy (Qi (pronounced chee) or Ki) around the body.

The points are where the qi ‘enters and exits’ and is more dynamic and can therefore be better affected to restore the body to health by removing blockages in the system. We call this regulating the circulation of Qi and Blood, by this regulation with acupuncture we aim to nourish what is deficient and clear what is excessive.

Traditional Chinese Medicine (TCM) is a complete system of medicine, and has the capacity to diagnose any condition in its own terms. Acupuncture is a part of it and can treat many ailments effectively. However there are limits, generally speaking that which is difficult to treat in conventional medicine is also difficult to treat with acupuncture. Sometimes though acupuncture and Chinese medicine works better than conventional medicine for certain things and without the side effects of medications. Click here to read some patients experiences. 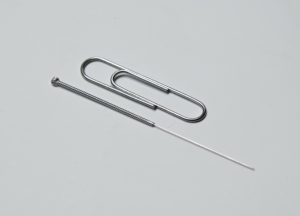 The honest answer to this is “it may do”. The needles are very fine and should not hurt when they pierce the skin, but when they are stimulated to get a “deqi” sensation of the qi arriving at the point, this may feel like an ache, an electric tingling, or an expanding, heavy, distending feeling.

This may be experienced as quite pleasant, but everyone has different reactions and very rarely people get a shock from acupuncture. In my experience some people are more sensitive and others don’t feel any pain at all, but even those who dislike it at first usually get used to it and associate the sensation with the benefits.

Are there any side effects to Acupuncture?

Not like the kinds of side effects one can get with pharmaceutical medicines. Patients sometimes report feelings of “light- headedness”, feeling “spaced out”, sleepy or even energised after treatment. A recent study concluded that driving after acupuncture was not recommended.

The patient may faint in what is termed “needle shock”, this is nothing to worry about as care is taken to anticipate if it may happen, and the patient is already lying down. Needles are removed immediately and resuscitated. This happens rarely, eg. When a patient comes without having eaten that day. We always check this first, it has never happened to any of my patients so far.

How long is a course of acupuncture treatment?

The answer to this depends on the problem presented, as a general rule of thumb there is a Chinese saying that however long one has had the problem in years, it will take that amount in months to treat. So usually the more acute a problem the quicker it can be remedied. Some people need as little as three, others have ongoing treatment over months and even years for wellbeing.

How much does acupuncture cost? Will my insurance pay for acupuncture?

The answer to this question also varies. In some areas acupuncture is cheaper than in others. My standard rate is £50 a session (see also pricing for block booking information)but there are discounts available in certain circumstances. Please ask me.

You will have to check with your provider as to whether your health insurance covers acupuncture.

How does acupuncture work?

Acupuncture works by affecting the flow of vital energy (Qi) in the body by the insertion of very fine needles into specific points on the body along. This body of points has been developed empirically over thousands of years. It is useful in thinking about this energy to realise that now modern science has shown us that everything is energy.

The earliest documentary evidence of acupuncture occurs in the Huang De Nei Jing (the Yellow emperors’ inner classic) which is dated at around 200BC and refers to it as an already existant complete system. By affecting these dynamic points of energy flow we aim to rebalance the body and restore healing.

There are theories using western science to explain acupuncture’s mechanisms involving the stimulus affecting the central nervous system or releasing muscular and soft tissue constrictions physically. However so far we do not understand the body in enough detail. In years to come the scientific knowledge of the brain and nervous, endocrine and immune systems may yield definite answers. I hope so. See also Does acupuncture have a scientific basis?

Do I have to believe in acupuncture for it to work?

No. My experience has been that many people try acupuncture unbelieving, very skeptical, or as a last resort, and frequently comment on how well it worked for them in the end, for them or someone close to them.

This is despite the inability so far to develop a research methodology for acupuncture satisfactory to all interested parties.

This is because the individualisation of treatment makes it impossible to treat properly while performing a double blind trial and it is difficult to find an adequate placebo for acupuncture. There have however been a number of clinical trials showing its efficacy, see the research section for more.

Does everyone practice acupuncture in the same way?

No. There are many different styles of acupuncture. I was originally trained in TCM (Traditional Chinese Medicine) acupuncture which was brought together by the Peoples Republic of China in the 1950’s in a process of gathering the disparate traditional medical practices that had developed over that vast country. They kept elements which resulted in a collection of a number of systems for diagnosis and treatment using herbs and acupuncture. I have also been influenced by classical pre PRC texts and the Japanese tradition of acupuncture, and consider what I do now Chinese or oriental medicine; trying to move away from the ideological problems associated with amending a pluralistic living practice.

Five-element acupuncture which uses a system developed by JR Worsley and Englishman who learned in China, using the Chinese wuxing, or 5 phases/ elements (Earth, Metal, Water, Wood and Fire).

Japanese acupuncture differs in its technique of application; they often leave the needles in for less time and change them during the course of a treatment. Some styles treat areas of constriction rather than, or as well as classical acupuncture points.

There are also other styles of acupuncture from other oriental countries, Korea and Vietnam for instance.

There is also a way of practicing commonly referred to as western medical acupuncture which uses set groups of points for specific pain problems which have been shown to be effective. Often, although not always, they have had little training in acupuncture, and little knowledge of the oriental theories upon which the system is based. This is likely the sort of acupuncture you would commonly receive from you GP, physiotherapist or osteopath although some of the above have the proper training and it can be very useful.

Does acupuncture have a scientific basis?

The short answer is that no one fully knows how it works in western terms (yet), although it was developed empirically in China which is a scientific method. The theory has grown out of traditional oriental medicine therefore it is proper to use that model to select the most effective acupuncture points. However as stated above doctors and physiotherapists apply acupuncture without grounding in the traditional medicine and still find it useful for certain conditions, and the protocols for treatment in different traditions vary.

Research carried out and featured on a BBC television programme about complementary medicine seems to show that acupuncture works by deactivating specific parts of the brain, altering pain perception and presumably restoring balance.

Research in Russia and Finland on lasers and the electrical resistance of the skin show that the channels have a lower resistance, and the acupoints lower still, which supports the idea that there is something physical to explain acupuncture.

Furthermore, Research into Fascial anatomy shows strong correlations between fascial lines of connective tissue and acupuncture channels. This includes evidence of tissue displacement distant to the needled point and indications that needling may interface with the neural and endocrine systems in this way, and that fascia plays a role in physiological communication. See the work of Robert Schleip and Helene Langevin. This is an area I am greatly interested in and working on.