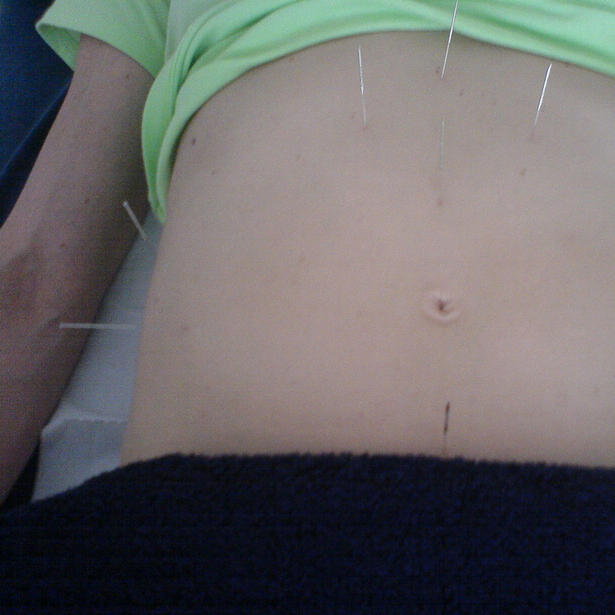 This case study summarises a course of treatment for irritable bowel syndrome. The aim is to show the workings of the diagnosis and development of treatment for other practitioners and so patients can understand what to expect.

Irritable Bowel syndrome (IBS) is a diagnostic label many people are given when they suffer from digestive problems that are not identifiable by western medicine. That is, it should have been shown not to be ulcerative colitis, crohns disease, coeliac disease or a malignant condition.

As a result the term relates to many different symptom pictures which have various different Traditional Chinese medical diagnoses. What is treated is a disharmony of the digestive transformation and transportation system. This is the case whether labelled as IBS or another functional gut disorder. The following is one such successful case.

The client, a female aged 27 presented with Irritable Bowel Syndrome since 2001 manifesting with diarrhea, sometimes sudden onset and urgent, abdominal cramping “like a wave of pain, hot, sharp, stabbing pain in the intestines; a hard feeling, sometimes a feeling of scratching.” Her bowels were irregular with a mixture of loose and dry stools.

The diarrhea during an attack smelt foul and sometimes contained undigested food. She felt the condition was exacerbated by stress and was worse with her period. She was feeling nauseous regularly, for periods around twice a week. She also experienced a constant low level aching pain in the left lower quadrant, later determined to be at Fujie Sp14. Prior to coming for acupuncture treatment she had modified her diet a great deal identifying and avoiding many foods, although she had not done a full elimination diet.

This client also experienced a left temporo-mandibular joint (TMJ) dysfunction due to tooth grinding, which was described as almost constant on the left hand side. She would grind her teeth in her sleep and this led to pain in her jaw, which would also click when she yawned. She had a history of depression and was on Prozac for about 8 months. Hay fever was also a problem for her, treatment began in April.

Her tongue was red and wet with central cracks, tooth marks and a rootless coat. Her pulse was wiry on the left and soft on the right with but wiry in the middle Jiao position.

Seeing the Stomach channel link between her two main issues (from the jaw to the abdomen) I decided to focus treatment on strengthening the Spleen and Stomach Qi while also smoothing the Liver Qi, with the working hypothesis of the Liver overacting on the Spleen due primarily to deficiency rather than a Liver excess.

As a base treatment (I tend to modify the prescriptions offered in order to be most suitable for the clients’ state at the time of the consultation) I used the following acupuncture points:

NB I have not seen the use of Ghost points in this way referred to much in the west, but training in Chengdu a Dr Hu taught that this was effective when there was a psycho-emotional element to the condition.

As combinations of points:

Ren12, Ren6 and St25 are very effective in regulating the digestion. I have found that needling them obliquely toward the umbilicus gets a stronger deqi sensation and has faster results.

St36 and Sp3 are an excellent combination to strengthen Earth as the earth points on paired earth channels, Sp3 also being the Yuan source point.

Improvement started after the first treatment to my surprise, I had expected a slower progress. Over the weeks as the severe pain and attacks became less frequent and then went I focused more on the left iliac ache, the jaw clicking and her hay fever.

I settled into basing the treatment around opening 3 channels of a yin-yang circuit (in this case Taiyin-Yangming) which I use, having beeninfluenced By Mark Seem and Japanese acupuncture theory. The Pulse became less wiry and the tongue less red quite quickly so I stopped using Liv3 and started using Taiyuan Lu9 as an arm point to balance the treatment.

As the more severe symptoms abated I used Daheng Sp15 and Fujie Sp14 unilaterally on the left consistently, and these symptoms gradually also decreased.

When the hay fever was an issue I used yintang and LI20 through-needled to Bitong in combination with Lu9.

I also sometimes used Quchi LI11 to clear heat and regulate Qi (in combination with St36).

At one point in treatment she had a cough and using Chize Lu5 and Hegu LI4 was appropriate and allowed me to stick to that principle of point combination.

In focusing on the jaw I also employed Xiaguan St7 in combination with Jiache St6.

It should be noted that the points were not just added on. I modified the prescription each session and never exceeded 16 needles, which is slightly more than I usually employ.

Results of IBS treatment with acupuncture

After 12 sessions over the course of 4 months the only persisting problem was an ache in her jaw, it was clicking much less and no longer hurt. The patient was sleeping better, had more energy, and felt that she was less susceptible to colds and hay fever.