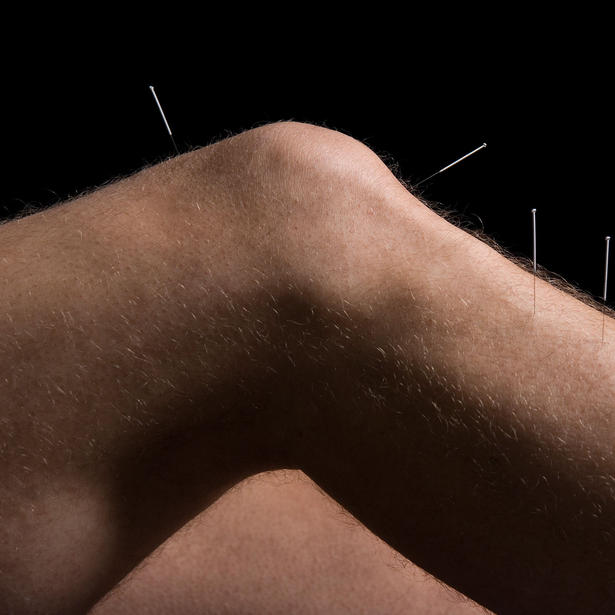 Account of treatment with acupuncture for knee pain in one patient including a discussion of the biomechanics leading to knee problems in patients with back problems.

This case had many elements to it as you will see but I am focusing on the knee pain so as not to overcomplicate the piece with other aspects of treatment. The young woman also has a scoliosis which will have had a mechanical impact on the use of the hips and knees that affects the knee problems. This will be discussed separately at the end.

Treatment of her back will be considered in a separate study, at the beginning of treatment she was having physiotherapy using acupuncture and so wanted to focus on the knee pain; which interestingly the physio had told her acupuncture doesn’t work for. The physion had given her exercises for the vastus medialis and gluteus medius and minimus to stabilise and strengthen the area which she was doing concurrently with my treatment.

The patient was 27 when treatment started and had experienced back pain since the age of ten and had had problems with her knees since a bicycle accident in the summer aged twelve when the left knee was injured. The right knee started having problems afterwards. The main pain was on the medial side of the knees, with more lateral pain on the right knee. There was swelling around the lateral eye of the knee (xiyan) on the right and the medial eye on the left leg. A sharp pain was also felt behind the knees.

Ligament testing showed tenderness on the medial collateral ligament of the right knee and a positive McMurray test on the left showed damage to the medial meniscus cartilage. They were generally better for rest but worst in the mornings and usually worse after exertion. The pain was worse in damp and cold weather and better for heat.

She was vegetarian and her digestion was regular but with a tendency to abdominal bloating and loose stools. She was prone to dull headaches in the temples and catching colds. She often felt tired and found it difficult to wake in the mornings, sweat easily but not at night. Her sleep was troubled by working late and stress preventing her from getting off but once asleep she slept soundly. She also experienced ‘flowery vision’ when tired and suffered from dry skin.

Her pulse was forceless and slippery and her tongue pale and puffy with tooth marks and paler edges.

Her underlying pattern was diagnosed as of Spleen Qi deficiency and dampness and a kidney Qi deficiency. I believe the kidney deficiency was congenital because of the scoliosis since she was young, but exacerbated by her long working hours. The spleen qi deficiency was also due to her work hours, but also her diet, which although it was quite healthy often consisted of cold and raw foods which are not as easy for the stomach to digest.

This all impacted upon her wei qi (defensive qi) causing the easy sweating and low immunity as well as allowing the invasion of pathogenic factors; exacerbated by the injury leading to damp predominant bi syndrome in the knees. There was also some underlying liver blood deficiency indicated by the vision, skin and pale tongue edges which probably arose from her diet.

Led by the above diagnosis and her preference to focus on the knee pain initially I decided use spleen and stomach channel points so as to tonify the spleen, drain damp and treat the pain simultaneously. The acupuncture points I drew from are as follows:

I tended to use six or seven of these points employing therefore twelve to fourteen needles. I ended up favouring Sp9, St36, Sp5 and Kid3 as a base but would adjust according to her presentation on a given day, when the pain was more lateral for example I would use GB33 and GB34.

Indirect moxa was also applied to warm the qi in the area, which is important in this case. Her physiotherapist had told her that acupuncture was no good for knees: the inclusion of diagnosis of the underlying pattern and treatment guided by it yielded better results than choosing a set of prescriptive points for a joint.

Initially the result was pain free for a short while after treatment and a reduced pain level when it returned. Over the course of 8 treatments the pain got continually further reduced and stopped reacting to the weather so much and began to be interspersed more with treatments for her back as this became more problematic. I would also treat them simultaneously on occasion; always addressing the underlying kidney deficiency.

Over this time there was also an improvement in her energy levels and digestion. Sleep improved by turns but was always affected by her work situation. The times when the knee pain flared up again but was always linked directly to an activity like a long hike or rock climbing.

Over the first three months the pain had significantly improved to the point of being bothersome rather than debilitating. In the course of a year the knee pain had ceased to be an issue and treatment was focused on rehabilitating her scoliosis and back pain. The knees would occasionally ache after exertion but have not been especially problematic since and always respond quickly to prompt treatment.

Discussion of treatment and rehabilitation process for knee pain

This may seem like a long time in treatment to some people but bearing in mind the structural problems she has and the history (she had suffered for fifteen years and it was generally getting worse) I think it is quite successful. The alternative, a lifetime on pain killers and the problems possibly leading to arthritis, did not seem attractive to her so she was looking for a way to resolve things long term and employ preventative measures.

It is worth discussing the diagnosis as well to highlight the fact that although the diagnosis of osteoarthritis is often comparable to the TCM diagnosis of Bi syndrome, the TCM Bi syndrome is not necessarily arthritis. It would be impossible to say if this patient would inevitably have developed arthritis early, or indeed later in life, but it seems likely given what we know about how it develops. Time may show that she develops it eventually anyway. However, I believe this is a good example of how Traditional Oriental Medicine can be used to identify problems early enough to prevent them rather than treating them when it is already a full blown disease and can only be ameliorated.

It is also important to mention the work that the patient put in to look after herself, by seeing me, by doing rehabilitation exercises, by learning pilates and improving her body use. All of these things will help her to remain well and healthy and hopefully trouble free in the future; we all need to take part in the therapeutic process to get the best from it.

Technical discussion of biomechanics of knee pain and scoliosis

The spinal scoliosis was a lateral flexion to the left in the lumbar region and to the right in the thoracic spine. There was therefore a build up in muscle and tension in the right lumbar and left thoracic paraspinal muscles, and trigger point activity was identified in the right iliocostalis lumborum and quadratus lumboram as well as in the left iliocostalis thoracis and the right rhomboid major muscles.

It is important to remember that modern understanding of spinal mechanics dictates that vertebral rotation is necessary for lateral flexion of the spine, so the muscle bulk imbalance is exaggerated by the transverse processes pushing the paraspinal muscles upwards.

The affect all this has on the pelvis is to hike the right hip, and in this case introduce torsion to the pelvis such that the right iliac crest is elevated and drawn posteriorly and the left is rotated downwards and anteriorly. This structure creates more strain on the inside of the left knee, and the outside of the right knee. It also means that when walking more weight is put through the left leg, weakening the tissue in the area and inhibiting vastus medialis which then fails to stabilise the knee, making the problem worse. It also has an effect on the organisation of the shoulder girdle and neck, but that’s another story…

This shows that it is important to look at the body as a whole in order to understand what is going on. It can be useful to use ones own body to get a picture, although ones own patterns of dysfunction will affect the conclusions you make. By adopting someone else’s posture one can feel what gets tighter and what is less engaged, how the weight is distributed, and if you walk, what is under strain.

From a structural point of view one can see how and why the affected channels of Chinese medicine are weakened and damaged; in this case the spleen, liver and gall bladder channels. This information sometimes corresponds to the internal pattern of disharmony so can also be useful in treating the constitutional elements of a pattern.