How to breathe correctly during yoga? 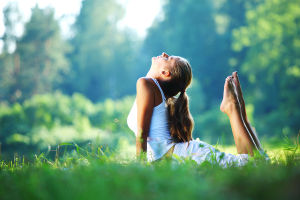 HOW TO BREATHE CORRECTLY DURING YOGA? A COMPLETE GUIDE

Yoga is well on its way to becoming the most popular workout regime for flexibility, strength, and mental and physical health. It originated from the Indian culture more than twenty-six thousand years ago. It is associated with the Hindu religion and it embodies spiritual enlightenment and the state of being. Today, yoga is so popular not because of the spiritual factor, but more so because of the numerous physical benefits, it has to offer.

Why does breathing technique matter?

To gain all the benefits yoga has to offer, you have to be mindful of your technique and whether or not you’re doing everything correctly. Yoga combines physical exercise with breathing techniques to create relaxation in the mind and body so it is safe to say that breathing is one of the most important aspects of yoga. Without the proper breathing technique, which helps regulate emotions and helps in concentration, yoga is no longer yoga.

Start off by relaxing yourself!

A lot of people start off yoga with some breathing exercises in order to calm themselves and boost their energy. For example, circular breathing is a good technique which can be used as a 3-minute stand-alone yoga practice on its own as well as a starter for a yoga routine. It is thought to have healing properties for body and mind both so pairing it up with yoga may help achieve energy boosts and mental peace in the form of curing depression, as well as physical comfort in the form of an immune system boost. You can practice circular breathing at any time of the day and on an empty stomach for long-term health benefits.

There are specific rules related to breathing while doing yoga which you’re supposed to follow no matter what type of yoga you’re practicing or what type of end goal you expect. Breath and movement are interlinked naturally and have to be paired correctly in yoga. The correct way of normal breathing is to push the abdomen out while inhaling and letting it come back in naturally while exhaling and breathing through your lungs.

Breathing during yoga is like a glass of water:

Since breath and movement are inter-related and affect the shape of the body, the two need to be paired in particular ways together in yoga to ensure correct yogic breathing. It should also be remembered that mindfulness is extremely important in yoga and relaxation through breathing.

In yoga poses where you open your front body such as in backbends or cobra posing, you have to inhale when you’re opening and stretching the front of your body.

In poses like the seated forward bend pose, the forward bending movements tend to compress the front of your body as your back is stretched. So forward bending, twists, and side bends all should be accompanied with exhalation instead of inhalation.

Sometimes in yoga, breath is held momentarily after inhalation or exhalation to prolong the effect of the inhalation or exhalation. After inhaling, when your chest and abdomen are fully expanded your body naturally resists any change in position or further movement. So if you’re planning on holding your breath, do it while you are holding a certain pose and not while you are moving. However, after exhalation the lungs and abdomen are relaxed and your body isn’t resistant to movement so you’re free to move and movements which compress your front are safe to practice.

The breath is supposed to be guiding the movements when you’re doing yoga so it is important you don’t push your body too hard and expand your lung capacity over time. The strained or disturbed breath will hinder your ability to relax and focus. You need to practice holding and moving with deep but effortless breaths. Breathing truly becomes a magical factor in yoga and relaxation when you master your exhalation technique. You may notice that deep inhaling and be holding your breath on an inhale is easier than exhaling because of the natural urge to take in the air immediately after exhalation. You need to practice breathing in order to calm down this natural tendency and eliminate any type of discomfort.

In conclusion, practicing what we just told you is key!

A lot of people breathe incorrectly. Studies show approximately 40% of the population breathes in the way opposite to the correct one. However, breathing incorrectly while doing yoga can have adverse effects as the body will get stressed and uncomfortable instead of relaxed and comfortable and that end result defeats the purpose of yoga altogether- and it is no longer yoga. Breathing correctly during yoga can make yoga a very useful and helpful activity while incorrect breathing can have negative effects on the body and inhibit your body’s movement.

This guest post was written by Hassan Khan Yousafzai, he is passionate about Digital marketing. Along with educational background in Software Engineering he is bridging gap between marketing and development department. At Techvando, he has been consulting brands all over Pakistan to gain online traffic and profitable leads.