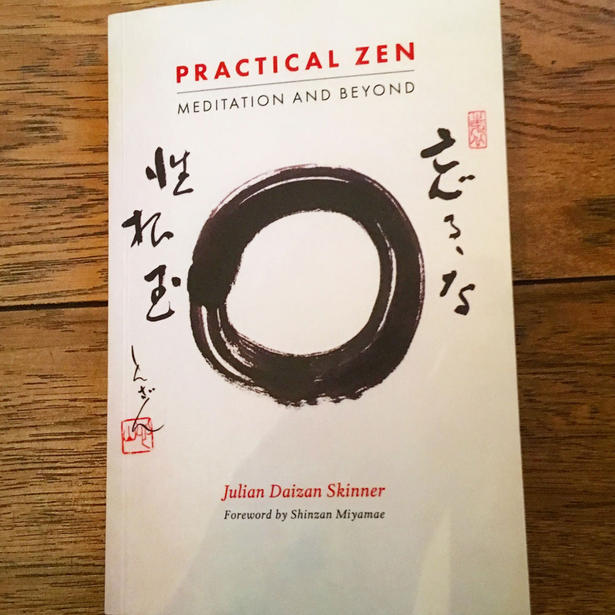 Finding my way into Zen meditation as a life practice

Practical Zen by Julian Daizan Skinner is just what I needed in a book, and it arrived just at time in my life when I was getting messages that starting a quiet, meditative practice could be useful for me.

Although I had always been interested in Zen or Chan Buddhist meditation, having studied Asian religions at university 20 years ago, I’d never actually tried it for myself. In fact, I had rejected such suggestions in the past as I find moving forms of mediation, such as qigong and yoga, much more to my nature. For me, the movement helps with embodiment and allows a point of focus through which to quiet the mind. However my yoga teachers started suggesting I supplement my practice with some more passive meditation, more yin time. Then I subsequently learned an old friend had been doing a zen practice for some years, and at the same time made a new friend who is a zen teacher. Everything was coming together, but what I needed as a next step was an introduction to the practice, and this book was ideal.

Daizan Skinner clearly lays out what one needs to do to start a practice and commit to it. There is just the right amount of back-story of his own journey, and the theory is fleshed out by accounts of some of the masters that have influenced his school of zen practice. Then its focus is on practice.

Each chapter outlines a meditation practice that he asks you to do for 30 minutes a day, for a week. Each chapter then builds by adding some dimension or new facet to the meditation. Although I went ahead and read the book through, with hindsight it would probably be better to stop after each chapter and practice that week before moving on. I think it would be a stronger more grounding process that way. Daizan Skinner explains that this 7 week period forms the basis for an incredibly useful mindfulness practice that anyone can use to manage their stress, get perspective, make space in their lives and ultimately be happier.

Also included is more about taking the practice further, what observations others have found in a journey towards different measures of enlightenment, with key readings from the historical tradition of practice. He writes clearly and openly without judgement, so the practice is open to anyone even if they already hold religious beliefs from different traditions.

So far I have found the guide to practice incredibly clear, and the skills and practice itself incredibly useful. Of course, sometimes it is very difficult sometimes to quiet the mind, and other times a little easier – it is still early days. However, I now intend to continue and ultimately find a teacher once I feel I have developed a solid basis. And if you too want to start meditating just like I did, then I’d recommend this book as a great place to start.